Way back in 2005, long before Donald Trump was a glimmer in the eye of the voting public, the American late-night TV host Stephen Colbert came up with a wonderful concept. He called it “truthiness,” defined as “the belief in what you feel to be true rather than what the facts will support.” 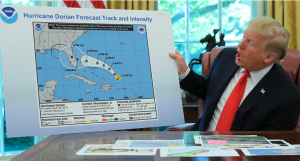 Watch the clip and while you’ll see that the notion of anti-fact long pre-dates the current American president, during his campaign he raised the conveyance of lies, misinformation, disinformation and disproved conspiracy theories to a crude, highly effective art form — so much so that around the time of the 2016 US presidential election, the Oxford English Dictionary declared “post-truth” as its Word of the Year, echoing Colbert with its definition as “the quality of preferring concepts or facts one wishes to be true, rather than concepts or facts known to be true.”

The idea, it added, relates “to or denot(es) circumstances in which objective facts are less influential in shaping public opinion than appeals to emotion and personal belief.”

From his insistence that Barack Obama had been born outside the United States and thus an illegally-seated president to his constant and repeated tarring of opponents based on false information, Trump literally built his campaign, and now his presidency on lies — as many as 13, 435 – an average of 13 lies per day – as of October 9, Day 993 according to the Washington Post, with the pace of his lies ever-faster in recent weeks. 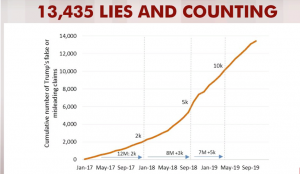 When lying is institutionalized

Why dwell on Trump and his lying? As journalists whose business is delivering “anti-fake news” for private- and public-sector clients who rely on us to ferret out the accurate from the inaccurate, the reliable from the unreliable and the truthful from the untruthful, Trump’s brazen contempt for actual fact is a constant affront, in addition to posing a real and present danger to the global economy, world peace and democracy.

His contempt as well for accurate reporting and honest media outlets in the service of his own vanity, incompetence and immorality — reflected as well by his direct associates and his entire administration including his acting Chief of Staff, Secretary of State, various spokespeople and personal attorney —  has made it still more acceptable for autocrats around the world to traffic in phony information (see, for example: Brazil’s Bolsonaro, Hungary’s Orban, and Turkey’s Erdogan).

And let’s not forget one of the most egregious examples of the destructive power of fake news and false information: the 2016 Brexit referendum, whose supporters relied significantly on indisputably erroneous facts to help make their case.

Certainly, lying and politics have always been bedfellows. But two recent factors have combined to make this era different than any before it. Call it the Double Whammy of Misinformation: the decline of mainstream news organisations and the rise of social media.

Nobody appreciates that damaging marriage more than the US president: “I doubt I would be here if it weren’t for social media, to be honest with you,” Trump told Fox Business News in 2017.

When Trump says social media, he’s really talking about Twitter, which he uses like a club that he wields over the heads of the frightened, many of them politicians from his own party — when he’s not pounding them with it, as he confirmed to a broadcast medium: “Tweeting is like a typewriter – when I put it out, you put it immediately on your show. When somebody says something about me, I am able to go bing, bing, bing and I take care of it. The other way, I would never be able to get the word out.”

Twitter and other social media represent one aspect of the problem, enabling anyone with a social media account, a digital device and an internet connection to become a publisher. He or she can make any information look “real” by skinning it to appear to be real news in or from a real publication.

That other factor — the decline of mainstream media — is actually the collapse of the traditional advertising-based business model for newspapers and magazines. The rise of digital media + the fragmentation of audiences + the demise of older print media consumers has translated into the rapid weakening and, in many cases, disappearance of the kind of responsible journalism — with fact-checking at its core — that once acted as a filter to weed out the erroneous.

In other words, the quality control once inherent in mainstream media has rapidly diminished and is disappearing.

All that said, there are steps you can take at least to better ensure the information you take in both personally and professionally is as accurate and trustworthy as possible. (At VitalBriefing, we talk incessantly and write frequently about this issue. No surprise as trustworthy, accurate and timely information is our bread and butter and what we serve our clients).

Start with this video, then consider these tips: 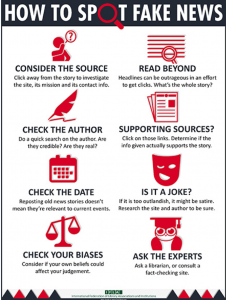 Here’s a handy tool, courtesy of California State University at Chico, to help you evaluate whatever you’re following. You have to love it for the name alone: The CRAAP Test (Currency, Relevance, Authority, Accuracy, Purpose)

Finally, keep an eye on the authoritative debunkers of fake news, among them FactCheck.org and PolitiFact.

It’s virtually become a civic responsibility to ensure that the factual material you’re reading, watching and sharing is accurate and truthful – no matter your side of any issue. Just know that it’s critical to our democratic way of life, as well as the health of your business or organisation, to make your judgements based on good information.