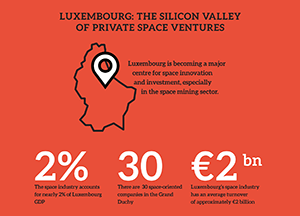 In just a handful of years, space has become a key business focus for companies and governments alike.

The quadruple play of reusable rockets, new satellite technologies, 3-D manufacturing and the advent of asteroid mining capabilities promise to usher in a new era of space exploitation.

Buoyed by headlines like “Space mining will produce the world’s first trillionaire,” the sector is drawing investors around the world, powering a steady increase in funding: Since 2009, $15 billion has been funnelled into the space industry – one-quarter last year alone from private investment in more than 112 commercial space company deals.

No longer is the sector reserved for the countries with the most developed space technologies and capabilities. As competition accelerates, both Luxembourg and Australia have launched their own space agencies this year, while governments across the globe have been spending significantly on various space-related programs, projects and missions.

Demand for satellites, especially, is the current major focus. As the infographic below shows, the global satellite industry more than doubled from 2007 to 2016, growth expected to continue and increase over the coming decade. Cheaper, smaller and more sophisticated satellites easier to launch into orbit – known as nanosatellites and CubeSats – are the principal investment drivers. However, it won’t be long until advances in relevant technologies shift the focus to the next great frontier: space mining.

Luxembourg is no stranger to the space industry, which already generates €2 billion a year, accounting for nearly 2% of the national GDP. Yet, the Grand Duchy has directed significant funds and resources to cement the country’s foothold, most recently inaugurating the Luxembourg Space Agency to encourage space-based industries – and creating a €100 million fund to invest in space technology start-ups.

As the contribution of space companies to Luxembourg’s economy evolves and grows, the government will continue to foster collaboration among key industry players, offering a legal, regulatory and business environment for activities including exploration and mining of space resources.

In fact, Luxembourg already is a recognised global leader in developing space mining, with an established regulatory structure that benefits companies in the sector, and $223 million of its national space budget earmarked for early-stage funding and grants.

With its space agency and ever-more-sophisticated infrastructure, the country is on track to become the world’s foremost space mining capital – not bad for a small, landlocked country successfully diversifying its economy for the future.